Do you know this Indian town without doors

The people of Shani Shingnapur still uphold the tradition of not installing doors and keeping their houses open to their neighbours and visiting pilgrims.

Spread across a mere 1km radius, Shani Shingnapur is small town of about 200 houses in the Ahmednagar district of Maharashtra, India, where throngs of pilgrims come to offer their prayers to the Hindu god, Lord Shani.

Here you’ll find one the most venerated temples of Lord Shani in the country, and Shani Shingnapur residents unanimously put their faith in the deity as their protector. Due to a 300-year-old legend, no house in the village has doors. And this belief extends beyond the residential houses to nearly all the town’s civic establishments, from hotels to the police station and even the bank. And there’s not a single shop in Shani Shingnapur where you can buy locks and keys.

Shani Shingnapur’s shrine of Lord Shani is a 1.5m black monolith installed on a platform without a cover from any side. Mustard oil ceaselessly pours out of a container suspended above the shrine, bathing the idol with the metaphorical dedication of his devotees. The temple remains open 24 hours a day, year round.

Although originally a humble ode to the deity, the much-visited temple is now administered by a trust that receives a substantial amount of donations from pilgrims and devotees. With time, the popularity of Shani Shingnapur has surged and the faith of the residents has strengthened.

Locals continue to live in simple and functional accommodations that are left open throughout the seasons, with mere door frames for entrances. Curtains can provide some sense of privacy, and plywood sometimes guards the bottom half of the doorway to keep stray animals at bay.

Locals go about their daily chores without worrying about the security of their houses and belongings; such is their staunch faith in Lord Shani that they even travel out of town for days without asking their neighbours to keep vigil.

“If someone has been dishonest or tries to steal in the village, that person would be unable to escape the punishments of Lord Shani and will bear the consequences of his actions,” said Dyaneshwar Kudalkar, who runs a guest house catering to pilgrims.

“When we are protected to this extent, we need not worry about making external arrangements for safety. There have been instances where people have installed doors or latches in their houses and have suffered accidents, losses in business or bad luck.”

Lord Shani, who is believed to be the personification of the planet Saturn, is venerated by numerous devotees who come from all over India to offer their prayers. According to popular belief, 17th-Century shepherds discovered a black monolith floating across a stream through the town of Shingnapur. They retrieved the stone and poked it with a stick. Immediately, blood started oozing out of it. Villagers assembled to witness the sight.

That night, a shepherd had a dream in which Lord Shani revealed that the monolith is his representation. When the shepherd sought permission to build a temple in his honour, Lord Shani responded that he didn’t need a roof over his head as the entire sky is his roof. He asked the shepherd to perform puja (worship) daily, and assured that the village would never suffer any perils of thievery. They renamed the town Shani Shingnapur.

The bank with no conventional locks 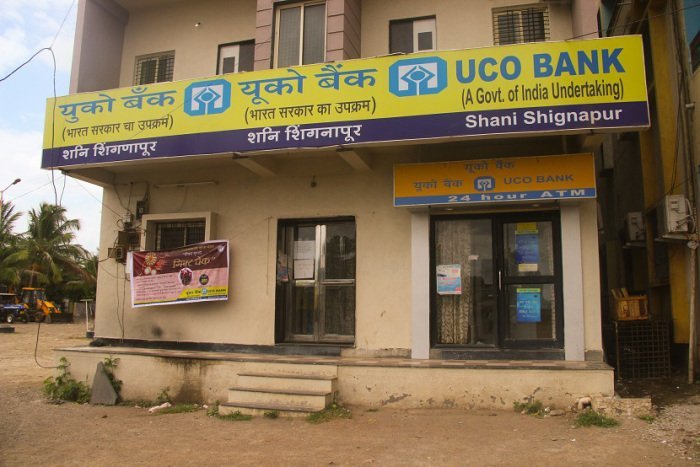 In January 2011, a ‘lockless’ branch of the United Commercial Bank was inaugurated in Shani Shingnapur – the first of its kind in the country – keeping the tradition of the village in mind. However, branch manager Mangesh Rakshe confirmed that money and documents are secure: although the branch doesn’t have a conventional lock, it has doors and uses a remote-controlled electromagnetic lock.

The branch currently safeguards the financial assets of more than 10,000 account-holders from across the town and nearby villages. The employees say they do not feel any lack of security but were concerned about occasional visitors who come from other parts of the country and are “too curious” about the bank.

Until 2010, there were no known instances of theft or burglary, but recently, a few complaints – such as small amounts of stolen cash, jewellery and other items – have been registered. A police official (who requested to remain anonymous) stated that small incidents sometimes go unreported as the economy of the village is centred on the temple, and such reports can tarnish its reputation and traditions. He added that some pilgrims who come to pray in the temple commit petty crimes like pickpocketing or vehicle thefts in the surrounding areas.

Shani Shingnapur’s population of 4,000 residents consists mostly of farmers who have land in and around the town. The main crops of this region are wheat, onion and sugarcane. Some residents also have shops near the temple area that sell puja items, household goods and food, while others work in the temple.

It’s a simple life, and residents share a close-knit, almost familial, bond. Women often cook together and help each other with household chores. After lunch and in the evenings, they discuss their day-to-day lives or take part in religious reading sessions at the temple.

“This is a small village where everyone knows one another,” said homemaker Ujjwala Bhaushaheb Dange. “There is immense trust within the community, and people stick by each other through the toughest of times. Of late, some outsiders, who have opened stalls near the temple, have relocated to this town. But they have also embraced the existing culture and traditions most cordially.”