Praseed Kumar Thayyil is back home after another busy day at work. It was the last day of planting rice seedlings for the new “rice paddy art” coming up on his paddy field. “We are ‘drawing’ Lord Buddha. The photo will be released in a month’s time,” says this farmer from Sultan Bathery in Wayanad district.

Developed by farmers of Inakadate village in Japan, rice paddy art or Tanbo Art is creating images in a paddy field using paddy of various shades. “The leaves and the inflorescence that bears rice spikelets come in different colours such as violet, purple, black, green, yellow… or in variations of these shades,” says Praseed, who has been into this art for the last five years. 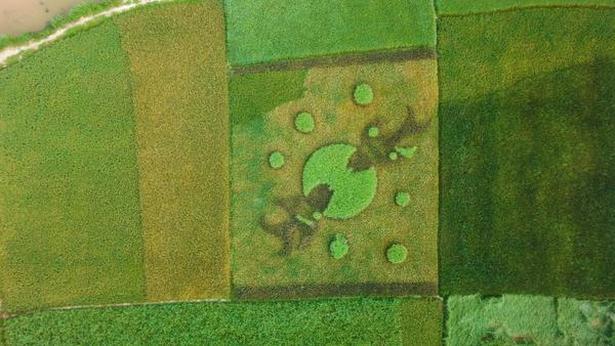 The first work to come up on his field was a map of India (2017). While the second one, an eagle, got washed away in the flood, the third figure, featuring Swami Vivekananda, failed after wild animals ravaged the field. Nevertheless, his team, led by his friend and artist Prasad, did not give up. Next year, they made the figure of an elephant as a tribute to Guruvayur Kesavan, the legendary tusker of the Guruvayur Sri Krishna temple. Last year, it was two fish.

“Once the field is levelled, the outline is drawn with rice flour. Then we plant the seedlings. A specific portion of the field is always set aside for paddy rice art. The new work is coming up on 30 cents,” says 47-year-old Praseed. While Nazar Bath, a black-leaved paddy from Maharashtra, makes the border, the main ones are Dambar Sali, a variety from Karnataka with purple leaves, Jeerakashala and Mappilai Samba (originally from Tamil Nadu). Recipient of Kerala State Biodiversity Board’s ‘Haritha Vyakthi Award’ (2019-20) for conserving and promoting rice varieties, Praseed grows over 125 varieties on 10 acres spread in three locations in the district. Born into a farmer family, it was 10 years ago that he decided to try growing new paddy varieties.

The first variety he tested was Krishna Kamod, the aromatic Basmati rice variety from Gujarat, on one cent of his field. When that succeeded, he began collecting more types from across the country. “Black rice has been an attraction for me and I grow it on five acres. I have come across 17 types, out of which seven are with me,” he adds.

With a focus on conserving seeds, he harvests them before they mature. “Not all seed collectors are interested in the sale or exchange of seeds. But I want to promote traditional rice varieties. I sell some of these varieties as grains as well. This Onam, I sold 50 kilogram of black rice,” he shares. The seeds and rice are mainly sold through his website, http://praseedpaddy.com/. In the last two years, Praseed has sold nearly 700 kilogram seeds, at rates varying from ₹50 per kilogram (Valichoori from Wayanad) , ₹500 per kilogram and up (black rice ) to the costliest ₹2,000 per kilogram (Ambemohar, a fragrant rice from Maharashtra). “Boka Saul from Assam is a unique variety. Merely putting it in water or milk is enough for it to be cooked. Once the seeds are ready, I plan to sell it at ₹5,000 per kilogram,” he adds.

Praseed emphasises that it is not easy to cultivate the black rice varieties. “At times, I get only 50 or 100 gram of seeds from seed collectors. There have been occasions when I could manage to get only a sheaf of a variety or just a few grains. In such cases, I grow them in pots and when there are enough seedlings I transfer them to the field. One such variety was Karuvachi, an indigenous variety found in the forests of Wayanad,” he explains.

A prized possession is Annoori in which flowering and ripening of the grain happens on the same day, between sunrise and sunset. Since it grows in the wild, there are debates about whether it can be called a paddy. “The grains remain on the plant for a day or two but usually birds eat them before I can collect them. I now grow them in 20 pots,” says Praseed. “Farmers are dependent on then monsoon and climate change always puts us in a fix; so it is high time we thought about cultivating more varieties to increase our income. I want to set an example by bringing in as many varieties as possible through rice paddy art,” he says.

PrevPreviousIs India’s Gold at the Olympics, an inspiration for a Nobel Prize?
NextHere’s Why House Centipedes are a Boon to your homeNext