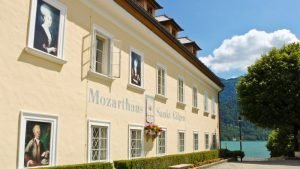 The name “Mozart” elicits the image of a child prodigy and an icon of classical music, but there was one precocious young musician who went by the name of Mozart. Maria Anna Mozart, sister of the composer we all know simply as “Mozart,” spent her early years as an acclaimed child musician alongside her brother—before their lives went in very different directions.

Born in 1751, Maria Anna Walburga Ignatia Mozart was Wolfgang Amadeus Mozart’s older sister by five years. Their father Leopold Mozart was a talented musician, widely recognized for his skills as a violinist and music teacher. Maria Anna was given several nicknames throughout her childhood, but she was generally known as “Marianne,” a combination of her first two names; however, among her close relatives and friends, she was often simply called “Nannerl.”

The Mozart family traveled extensively in order to showcase their musical abilities. The two young children soon gained quite a reputation in high society as extraordinary and precocious musicians. In his book Mozart: A Documentary Biography, Otto Eric Deutsch reveals contemporary letters and diaries of those who encountered the Mozart family during Marianne and Wolfgang’s early youth. An Austrian courtier, Count Karl von Zinzendorf, described how the children performed together in front of some of Europe’s elite in 1762—when Marianne and Wolfgang were respectively 11 and 7—and impressed them all greatly.

During her childhood, Marianne was part of a double musical act with her brother, and both children were showered with praise for their talent. Deutsch cites another report of their traveling performances, which reveals that by 1766, Marianne was regarded as “tolerably tall and almost marriageable already.” And, once again, the siblings’ performances were tied together as their individual talents were compared.

Was Marianne a composer as well? It’s certainly possible that she was—in fact, surviving letters exchanged between herself and her brother seem to reference her own compositions. However, as Maynard Solomon’s Mozart: A Life points out, Marianne and her mother had started to be left out of trips across Europe by 1770. And after her mother’s death, she stepped into the role of “housekeeper, nurse, daily companion, and defender of the faith” for her bereaved father.

Once she reached marriageable age, it was considered inappropriate for Marianne to perform in public anymore. She was now a young woman, not a member of a child novelty act. Her only duties were to be her aging father’s companion and to secure a suitable husband. By the time she turned 30—still a single woman, beholden to her father—she wished to marry Captain Franz Armand d’Ippold. However, her father vetoed the match. “Presumably, Leopold, not yet ready to yield his daughter to another man or desirous of a match with someone of higher social standing, had terminated the affair.”

As her beloved brother became more and more famous, Marianne slipped further and further into the background. After all, there was little market for a professional female musician in those days, and her father’s iron grip on her life presented another obstacle. (Although, Solomon notes, Wolfgang may have tried to encourage her to rebel.) Instead, she was eventually married off to Johann Baptist Franz von Berchtold zu Sonnenburg, a widower with five children whom her father selected for his wealth and status. Perhaps unsurprisingly, Leopold Mozart’s dominance over his daughter’s life continued even into her marriage. For example, after the birth of her first son, who was also named Leopold, the infant was left in his grandfather’s care.

Ultimately, Marianne simply faded into the shadows. She mostly lost touch with her brother, and after her husband’s death in 1801, she spent her final decades working as a music teacher in Salzburg. She died in 1829.